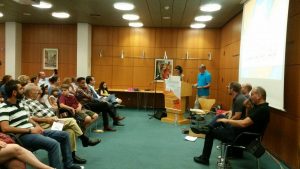 The word of the Ugarit cultural center

Demonstrations began seven years ago in most Syrian cities and villages calling for freedom and dignity. However, before the eyes of the whole world, the tyrannical regime confronted the unarmed people with all kinds of violence such as arrests, torture and murder. Yet no practical steps have been taken by the international community to halt the crimes of the regime. This eventually led to Syria transforming from a country that experienced a peaceful revolution with the aim of overcoming the dictatorship into a regional and international theater of war. The result was hundreds of thousands of victims, including fatalities, prisoners and those who disappeared, as well as the destruction of cities, villages and houses (around 3 million houses were destroyed) and the forcing of the population to emigrate, either within the country or into near or further exile, so that today we can say that around half of the Syrian population (more than ten million people) are emigrants and asylum seekers. Without a doubt, the arrival of a refugee in a country like Germany (which we greet with great gratitude, as well as its friendly population, which has taken in hundreds of thousands of Syrians) and the feeling of security that sets in, the residence permit, family reunification, language acquisition, finding a decent job, all of which have their own merit. And yet after all this the refugee finds that he first has to find his way in this new life, shake off the feeling of being foreign and calm down. These things are just as important as those mentioned before. This is where the search for answers to questions of identity, belonging, home, citizenship, time and place begins. And while some close themselves up, weep for the past and lead an outsider’s life, others are driven in exactly the other direction he begins to detach himself from his own history, culture and identity. Now there are others again, and we belong to them, who believe that we hold on to our own identity and the positive in our own culture, history and values, and at the same time open ourselves to the new society and actively integrate ourselves can. Because as Goethe said: “Man only knows himself insofar as he knows the world.” If we know ourselves and also know others, we understand that “the whole thing is untrue”, as the philosopher Adorno said. Yes, every culture has its own identity that sets it apart. But that does not mean that there are not factors that all cultures have in common. Every culture also has traces of other cultures, just as every identity contains traces of other identities. Hence, the purity of a culture – if this term is applicable at all – is a mere assertion that has no real equivalent.

In this context and inspired by the thinker Edward Said, the poet Mahmoud Darwish wrote:

The east is not entirely east

the west not quite west

because identities are open to diversity

The integration into the new society is a great challenge, not only for the refugees, but for the whole society, be they locals or newcomers. Organizations, parties and the government are also part of it. Because the successful integration process is based on the principles of participation and interaction between everyone involved. In this respect, one can say that the existence of Arab cultural centers, especially those that are committed to the evidence of modernity and the Enlightenment, is of great importance. And when the number of people of Arabic origin increases, spaces for activities, creativity and dialogue become all the more necessary. Of course, these centers must become part of the general cultural scene in Germany and take on the role of encouraging mutual opening and interaction. We are doomed to hope. What is happening today cannot be the end of the story, to quote the playwright Saadallah Wannous. In addition – as the poet Mahmoud Darwisch says – there is always something on this earth that is worth living for. With these words we announce the establishment of the Ugarit Cultural Center here and now.

Ugarit Cultural Center invites you to share your cultural contributions in the fields of poetry, short stories and essays, as well as your artistic contributions in the fields of painting/drawing, photography, video and artistic design. We welcome your participation on the e-mail of our center: info@ugarit-kulturzentrum.com The materials suitable for publication will be displayed on the website and Facebook page of our center.